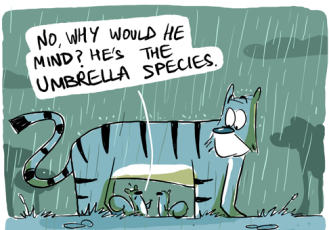 What are Umbrella Species?

Why are they useful for conservationists?

Animals that are identified as the umbrella species within the ecosystem tend to have larger ranges for their own habitat that can cover multiple different habitat types. This is useful for conservationists to merely monitor an umbrella species to determine how the changing environment is affecting the ecosystem, rather than having to monitor all the species present. This makes monitoring faster and cheaper and allows conservationists to study how the stable an ecosystem is against disturbances.

An example of an umbrella species would be a Tiger!

Efforts have been made to save the populations of wild Tigers in order to save other species that are present in the same ecosystems such as Leopards, Monkey, Hares, Boars, etc. When Tigers survive well in the wild, other species along the food chain are also thriving as a result. For this reason, measuring the health and functionality of tigers can help conservationists measure the health of the ecosystem they are in.

However, there are currently only around 3,500 Tigers left in the wild and it is expected that within less than 20 years this amazing species will be extinct in the wild. It is thought that as this species is an Apex Predator – meaning nothing preys on it – it is humans that have reduced Tigers to such a low population to date.