The basking shark is not only the biggest fish in Irish waters, but also the second largest fish in the ocean, behind the enormous whale shark. The basking shark belongs to the same family as the great white shark and has the most teeth of any shark. Despite this fact, the basing shark are extremely docile and harmless, feeding on tiny organisms and plankton. 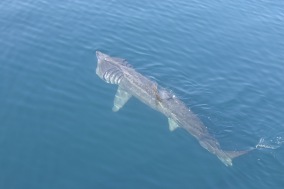 The adult basking shark averages between 6 to 8 metres in length and can weigh over 5 tonnes. Some specimens have been known to exceed 12m in length and weigh over 10 tonnes. Basking sharks have gill slits, which go nearly the whole way around their heads. This is useful for their filter feeding method. They are generally either bronze/brown coloured or slate/blue coloured, with a pale white underbelly similar to that of a great white shark. Their dorsal fins can measure up to 2 metres in length, which makes them a common victim of the shark fin trade.

Basking sharks, as the name would suggest, swim slowly, near the surface of the water when feeding. They swim with their cavernous mouths wide open, taking in huge amounts of water. This water is filtered through the basking sharks’s large set of gills, which retain plankton and small organisms for the shark to feed upon.

Basking sharks reach sexual maturity between 12 and 20 years old. They are generally solitary, but have been known to travel in small groups. The basking shark migrates to deeper water during the winter.

Basking sharks give birth to live young, with eggs developing within the female. Gestation period is thought to be anywhere between 1 and 3 years, with new-born basking sharks measuring up to 2 metres long at birth.

Big Mouth: Basking sharks are known to have monstrously large mouths. Despite this fact, they prey on very small organisms and plankton by swimming with their mouths open – not unlike a fishing net. In doing this, they filter through up to 1,500 gallons of water every hour!

Big Liver: A basking shark’s liver weighs a whopping 25% of its body weight! It is believed to aid buoyancy and energy storage.