The red squirrel is a member of the rodent family. Squirrels are distinguishable by their long bushy tails, which can measure almost the same as their body length. Body length can measure up to about 23cm whereas their tails can grow to about 20cm. Adult red squirrels can weigh up to 340g and fully-grown males and females are generally the same size. This means that the species is not sexually dimorphic.

The red squirrel is a native species of Ireland, living in wooded areas in nests known as ‘dreys’. Dreys are made from foliage, sticks and bark against trunks, limbs and holes in trees. Red squirrels are know as an ‘arboreal’ species, which means that they spend most of their lives high in the trees.

The red squirrel’s diet consists of fruits, seeds and berries. Their diet varies depending on seasonal availability. Contrary to popular belief, red squirrels do not hibernate. They do, however, forage and horde food during the plentiful autumn season to ease the harsh winter period.

Irish red squirrels reproduce once or twice a year, depending on the abundance of food. Gestation period is about 40 days, with young being bald and blind when born. Young squirrels are independent after about 10 weeks. The average lifespan for a red squirrel is about three years, however, females generally live longer than males and can sometimes live up to six years. 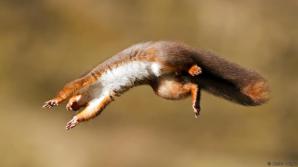 The red squirrel is categorised by the IUCN Red List as ‘Least Concern’. The IUCN has justified this classification by the population size and wide distribution of the species. Despite obvious local examples of threats, such as the invasive grey squirrel (Sciurus carolinensis) in Ireland, there are no widespread, global threats to the red squirrel population.

Handy: Red squirrels have been observed to favour either their right or left hands when eating. This trait is known as laterality and is not common in many animals.

Swimmers: Red squirrels are quite strong swimmers with some evidence suggesting that they are capable of swimming long distances. When they swim, their large tails provide buoyancy and steering.