Coal Tits are one of the top-20 most widespread garden birds in Ireland. For this reason, this bird is very common to see in Irish gardens, especially those that have bird feeders! They are a green-listed species in Ireland, meaning that they are not considered to be threatened in our country. Currently, there are an estimated 270,000 breeding pairs in Ireland.

Coal Tits are present in Ireland year-round as they do not migrate during winter seasons. However, when winter does arrive, this bird will form built-up flocks with other tit populations and seek out food sources in nearby gardens, parks and woodland areas.

Their diet mainly consists of seeds, nuts and small insects. This is why they are so common to see in gardens that have bird feeders, they just love peanuts and assorted mixes! 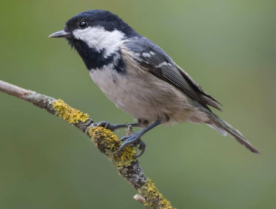 They are remarkable to see in flight, as they are very fast and very slick! They can be quite hard to detect when in flight by the novice birdwatcher, like myself, but they are amazing to see! The best place to see them in slower pace, is most likely at garden bird feeders!

Coal Tits mature for breeding abilities after their first year. These birds breed right throughout the country and often nest in tree hollows in coniferous woodlands and urban gardens. The breeding season for these birds ranges between early April to late June. The female lays approximately 6-12 eggs per breeding season and incubation will last approximately two full weeks. Both the male and the female will care for the chicks after they have hatched. The chicks will fledge after about 20 days of being born. 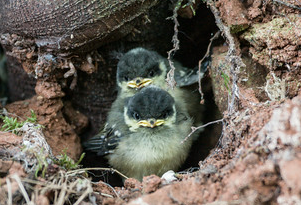 Lifespan: Coat Tits have quite short lifespans, living only up to 2 years.

Tiny Size: Adults grow to be about 4-4.5 inches in length and only weight about 8g! Their wingspan is double their body length, often being up to 8.5 inches!