Minister Heather Humphreys and the rest of the Department of Arts, Heritage, Regional, Rural and Gaeltacht Affairs are asking the Irish public to report any sightings of our iconic Curlew. The Curlew is one of the most threatened birds on our island and is rapidly sliding towards local extinction in Ireland.

The Department have been attempting to conserve the species in Ireland by creating the Curlew Conservation Programme which aims to protect these birds that inhabit our island. There are currently 15 fieldworkers contributing to locating breeding Curlew populations across areas in Ireland that are known to be Curlew habitats. There is funding available for landowners to become engaged in this programme in the efforts to optimise it’s success.

This conservation programme focuses on six of the most important areas in Ireland that are known to be ‘hotspots’ for breeding Curlew. These areas include Lough Corrib, Northern Monaghan, Lough Ree, Northern areas of Roscommon and Leitrim as well as Donegal and the Stack’s Mountains in Kerry. 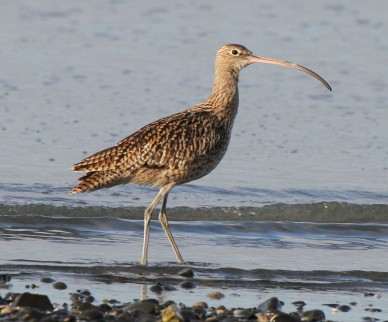 Curlew decline has been the result of continuous habitat destruction and fragmentation by human activity, such as infrastructural growth on marshlands, over the last few decades. As a result, the species are now red-listed as a species of conservation concern in Ireland. If the Irish public does not get involved in programmes such as this one, the Curlew will soon cease to exist in Ireland.

Members of the public are being asked to get in touch with the Agri-Ecology Unit of the National Parks and Wildlife Service (NPWS) if they have any information on Curlew locations or sightings now or during the summer months to come. The department is also encouraging people to contact them if they wish to become involved in this programme.

2 thoughts on “Irish Public asked to report sightings of Curlew!”