The Western European hedgehog is the only hedgehog species found on our island!

Although their small size, hedgehogs like to explore vast areas across Ireland and it has been found that females travel up to 15 hectares and male hedgehogs move farthest away with an annual exploring range of over 55 hectares! That’s a lot of exploring for such a little mammal!

Hedgehogs are very diverse with where they like to live and can occupy a large range of habitats. Hedgehogs are good at colonising urban areas as they like to use garden sheds, hedgerows and other urban features for their shelter and protection. When in a more rural setting, hedgehogs like to live in woodlands and marshlands!

Hedgehogs breeding season is between May to July – sometimes can be a wider range but this is the average season. Hedgehogs are a promiscuous species which is why they are such successful breeders! Females will mate with multiple males during the breeding season to optimise her chance of offspring.

Every year, hedgehogs have 3-6 offspring during the breeding summer seasons. The offspring are blind and their spikes are soft so they are most at risk of dangers and predators for their first 6 weeks of life!

Hedgehogs are the only mammal in Ireland that takes part in a full-scale hibernation (bats being an exception here). Hedgehogs hibernate from the beginning of winter (October) to late spring months (April/May). This is an incredibly long time and for proper survival hedgehogs must forage for a long time before they hibernate!

The species diet is mainly insects as they are known to be insectivores. Hedgehogs are nocturnal and forage during night-time! For this reason, they are at risk of being preyed on by other nocturnal animals such as Owls. 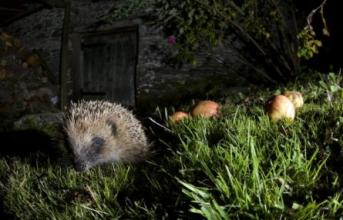 To the best of my knowledge at present, the conservation status of this species in Ireland is not 100% certain whether there has been a continuous level of decline in recent years.

The hedgehog is protected within Europe including Ireland under Appendix III of the Berne Convention 1979 and Wildlife (Amendment) Act 2000.

Decline of hedgehog populations across Europe has been largely due to agricultural intensification over the last four decades and greatly due to the implementation of the Common Agricultural Policy!

As well as Owls, Badgers are the main predator for hedgehogs and many of the species are attacked and preyed upon while hibernating during the winter seasons. Badgers aren’t nocturnal but if they find a hibernating hedgehog during their day-time routines…they will eat it!

People often leave little man-made ‘hedgehog homes‘ in woodland areas and gardens to provide shelter and protection for the species, especially months coming up to their natural hibernation seasons (winter!).

There are loads of wildlife organisations in Ireland that provide care for hedgehogs and provide public information on what to do if they are found.

Hedgehog Rescue Dublin and Irish Wildlife Matters are two local bodies which provide online information and details on what to do if an injured or potentially ill hedgehog is found during the day by people.

The below links advise on what to do if you have found a suspected injured or ill hedgehog:

What’s in a name?: The hedgehog gets its name for an obvious reason that it makes little grunting noises as it passes through bushes while foraging for food!

Spikes: Hedgehogs are famous for their spikey little bodies! There are on average about 5,000 little spines or ‘spikes’ on a hedgehog. Each spike lasts about a year and falls out, a new one then begins to grow!

Unwanted room-mates: There are about 500 fleas living amongst the spikes of hedgehogs!

Natural Shield: The spikes on a hedgehog are known to be the main method of protection for the species against predators – hedgehogs form a shield-like style by rolling up into a tight ball that allows for all the spikes to surround its outside so that predators will be pricked when attempting to eat the hedgehog!

Gang names: When a group of two or more hedgehogs are together (rare but can happen) their little group is known as ‘an array’.

Immunity: Hedgehogs are known to be immune to snake venom and therefore can survive venom through bites from the likes of Adders! (If they survive by not being eaten in the first place that is!)